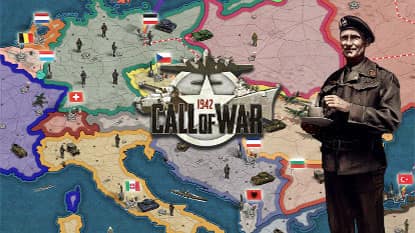 87%
This game does not work on your device

Call of War is a thrilling war strategy MMO game set during World War 2. You will get to see history unfold in a series of brutal tank clashes, naval battles, and complex air combat strikes. In Call of War, you can take control of one of the most influential powers in the times of WW2. Research the top-secret weapons of the Second World War (such as the atomic bomb) and try to forge strategic allegiances with other nations. Fans of strategic board games such as Risk and Axis & Allies will enjoy the challenges of Call of War. You can play multiple rounds and experiment with different strategies. Move through landscape maps full of real opponents and take on other players in battle. Figure out how to play the various scenarios and keep your economy running in wartime. The different terrains you will have to conquer come with unique challenges each time and demand real tactical insight. Your units move in real-time, and you can unlock over 120 different units in your massive development and research Tech Tree. Fight alongside your friends in private rounds, or prove yourself in open battle mode!